Shelters Going Up at the Soccer Complex 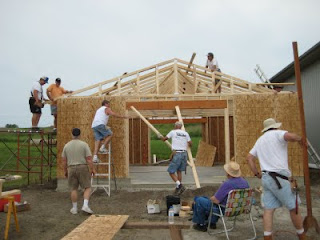 The Kiwanians are at it again. Last Saturday, August 15, the Cedar Falls Kiwanis Rough Risers and a team from Cedar Falls Kohl's began building a shelter for the Cedar Valley Soccer Complex. This is the 4th shelter that the club has built for the complex. Unlike the other wall-less weather shelters they built before, this walled shelter was created to house equipment and supplies.
The workers began at 8:00 AM and spent most of the day measuring, cutting, hammering and laughing. This project is the joining together of master craftsmen and those who are less experienced but willing to swing a hammer or carry a board.
This shelter is one of 9 shelters that the club has committed to completing. They built 2 shelters last summer and still have another weather shelter to build this summer. The two shelters that were built this year were funded through two grants: one from John Deere and another through the Blackhawk Gaming Commission.
Enjoy more photos at Michael Davidson's photo site. 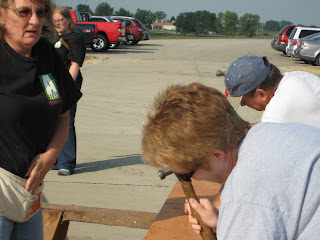 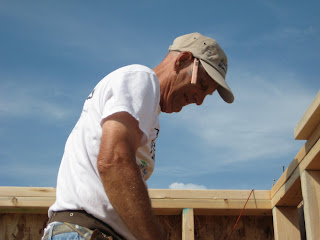 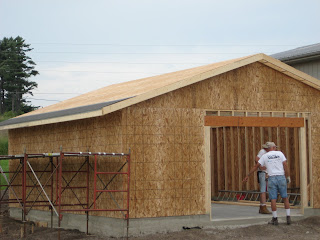 The shelter after one day of work. The workers continued to build throughout the following week.