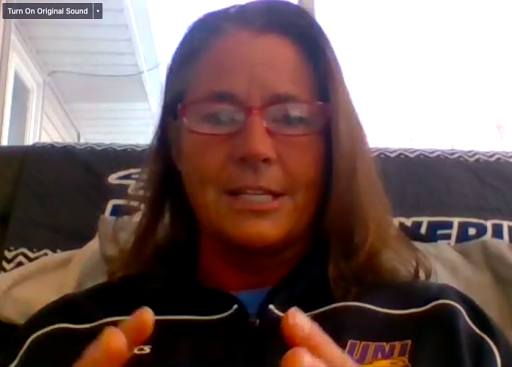 Wednesday, February 24 - There are no Cinderellas connected with the UNI Women’s Volleyball Team; because they have the legendary Head Coach Bobbi Peterson. She is not a pumpkin and the players don’t run away from the ball!
The Coach is the Missouri Valley Conference's winningest volleyball coach ever. Her secret is that she treats her athletes like family to develop their skills both on the court and in the classrooms. Her players have a combined GPA of 3.67 which is a huge accomplishment in its own right.
It has been a tough COVID-19 year and a building year for the team. We look for a strong team record in the future!  Written by Lynn Barnes
Posted by Leigh at 7:30 AM No comments:

Fellow Kiwanian Brian Sanderman of Invision Architecture shared the vision for the new Cedar Falls High School being developed this Spring just west of the UNI-Dome. Brian and Superintendent Brian Pattee shared insights about the overall aspects, strategy, implementation, safety, learning, and the future plans for the old school. It was amazing to learn about the complex process of designing such a school. The experience and vision of Brian and his team helped alleviate the anxiety and fears on the planning and construction phase.  We look forward to an innovative learning environment to soon emerge on 27th St in Cedar Falls. 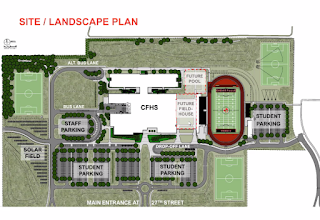 The home of the Tigers will last generations of Cedar Falls students and it will be a school of which we will all be proud!   Written by Lynn Barnes 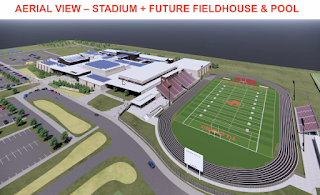 Our club members get together to discuss what's happening now and make plans for the future.  We talk about projects, kettle corn, finances, marketing, and a plethora of potential possibilities

Wednesday, February 10 - Let's Talk with Mayor Rob - Mayor Rob Green, Cedar Falls.
Mayor Green is a former US Coast Guard officer and has lived in Cedar Falls since 2004. He was President of the Overman Park Neighborhood Association for several years, then was elected to the City Council in 2017. He has served as Mayor since January 2020. He holds a degree in government/public policy from the U.S. Coast Guard Academy, and an M.A. in Instructional Technology from UNI. He will discuss current issues facing Cedar Falls. 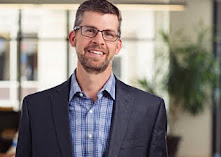 Wednesday, February 17 - What's Ahead with the New Cedar Falls High School? Brian Sanderman, Lead Architect, Invision Architecture.
The Cedar Falls School Board recently accepted bids for the new school, which fortunately came in well under expectations. The Board has also chosen to add a swimming pool to replace the aging pools at Holmes and Peet Junior Highs, to be financed with funds from the city, the school district, and private fundraising. Sanderman, who is also a member of the Waterloo Kiwanis Club, will tell us about the forward-looking features of the new school, including adjustments made after experiencing a pandemic.

Wednesday, February 24 - What's Up with UNI Women's Volleyball?  Bobbi Peterson, Head Coach, UNI Women's Volleyball. Coach Petersen is the coach of the UNI
volleyball team but she was one of the best to ever play at UNI and her name is still among the leaders in several statistical categories. She is in her 21st year as our head coach, and on February 7th became the all-time winningest coach in the Missouri Valley Conference, with her 510th career win.  Volleyball is normally a fall sport but because of the pandemic, it was moved to spring. That move also cost the team several seniors who graduated early, so Coach Petersen this spring has been bringing along an extremely young team. She will tell the Rough Risers about the challenges and potential of this team.
Posted by Leigh at 8:00 AM No comments: