Rough Risers Thank Peoples Clinic for their Support against COVID-19

Monday, June 22, 2020 - Peoples Clinic, a non-profit health care clinic, has been helping people in Waterloo since 1976 but they really showed their commitment and dedication in their recent confrontation with the COVID-19 pandemic.

The Cedar Falls Kiwanis Rough Risers club recognized the critical care that Peoples Clinic has been providing for the people of Waterloo and they wanted to show them their gratitude.  The club joined together to write Thank You notes for all of the Peoples Clinic team and raise the money to provide 140 HyVee $10 gift cards as well. On Monday, June 22, Jim Larson (Rough Risers President) and Leigh Zeitz (Project Coordinator) met with Augusta Sires (Peoples Community Relations Specialist) to present their gift for the employees.

Since March, the Clinic has administered over 1300 COVID tests and they have given as many as 45 tests in one day. This outpatient clinic has gone through many changes to attend to their patients' needs. The Urgent Care room was converted into a respiratory clinic to better serve patients and protect the rest of the clinic. The lobby has been redesigned to provide adequate social distancing. All patients and staff are required to wear face masks. They are now using Telehealth systems to meet with patients virtually.

Beyond providing health care services during an intense and challenging time, there have been many instances when their staff has assisted patients with personal needs. Due to COVID-19-related supply shortages and financial hardships, they have provided patients with personal care items, toilet paper, and food. They are also holding a clothing and a school supply drive right now in order to continue taking care of their patients in the most comprehensive way possible.

The Peoples Community Health Clinic is dedicated to "providing access to affordable, compassionate, high-quality health care for all."  Our Kiwanis club thanks Peoples Clinic and our support of them aligns with our mission of "Serving the Children of the World."
Written by Leigh Zeitz and Augusta Sires

This story was covered in the Waterloo Courier:

Nate Loenser Makes it to the Big Leagues 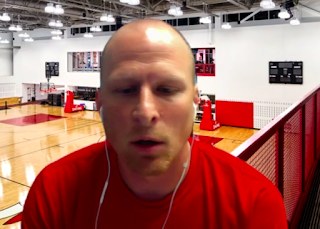 Wednesday, June 10 - "Doors will open when you work hard and treat people right."  These are the words of Nate Loenser who shared his life accomplishments with us today.  Nate is an assistant coach for the Chicago Bulls but he began coaching basketball for the UNI Northern University High School in 2001. It's been a long road but he "never set a glass ceiling" for his accomplishments. He never took any day for granted.

Nate took us on his athletic journey as he played baseball, basketball, football, and golf in high school. Sounds like a typical high school athlete, but there was nothing typical about Nate because he was able to excel in these sports with a limb difference of having only one functioning arm.

Professionally, Nate followed his passion for basketball as a high school coach in Cedar Falls, Ames, and Spirit Lake. He coached basketball at the University of Southern Mississippi and Iowa State University.  In 2015, he became an assistant coach for the Chicago Bulls - the team he had been rooting for all of his life.

The most important part of Nate's presentation was when he shared his ideas about life and coaching. He has succeeded in life by never setting limits on himself nor the players he coaches. Nate views the foundation of successful coaching as building relationships with his players. He sees himself as a teacher who needs to help his players learn the "why" as much as the "what" of the game. Nate wants to make a difference in his players' lives.

Nate made us feel hopeful and we look forward to watching him succeed and making a difference in players' lives.   Thank you, Nate.
Written by Leigh Zeitz

40-minute recording of Nate's Presentation
Posted by Dr. Z at 8:25 AM No comments: