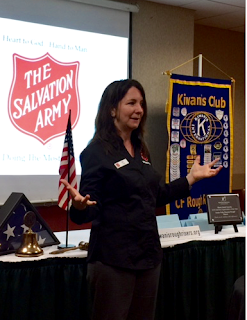 February 22, 2017 - Niki Litzel, the Community Resources Coordinator of the Salvation Army of Waterloo/Cedar Falls, spoke to our club on February 22nd.  She gave an informative talk of the multi-faceted functions the Salvation Army and how they provide faith-based social services for the communities of the Cedar Valley for over 6 generations.  They provide much needed services with over 1.5 million strong in their work force worldwide and provide these services to 32 million who are served in the U.S. alone.  They are represented in over 127 countries.

Niki explained about the Disaster Emergency Services, Kitchen, Worship Center, Women’s & Men’s Shelters, Thrift & Charity Shops, and the Red Kettle Program that are provided through their organization.  Eighty three cents out of every dollar that is donated to the Salvation Army, are used directly to help their patrons.  They are always looking for volunteers for their annual fund drive in the Bell Ringer program.

It was quite informative and we were glad to hear about their many accomplishments.  We are glad that we can support them in their activities.  -   written by Lynn Barnes
Posted by Dr. Z at 1:15 PM No comments: 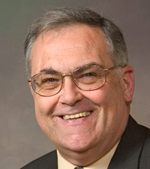 February 15, 2017 - Mike Butler, President of the Rotary Club of Cedar Falls shared Rotary and his many exciting experiences with the service club.  Mike has been in Rotary for 30 years. He has had many experiences in Rotary but he said that the high point of his membership has been as the club president.

As of February 23, Rotary International will be 120 years old.  It is a networking organization with over 1.2 million members worldwide.  In 1987 women were allowed to join Rotary.  While Rotary clubs have accomplished a great deal for their local communities, one of their greatest achievements has been to contain polio worldwide. They began in 1979 and have immunized more than 2.5 billion children in 122 countries.  Their work has reduced polio cases by 99.9% worldwide with polio only remaining in 2 countries.

The Rotary Club of Cedar Falls club is an important service club in the Cedar Valley and we thank them for their work. - written by Leigh Zeitz
Posted by Dr. Z at 10:04 PM No comments:

Brock Goos Shares a Surprise with Us! 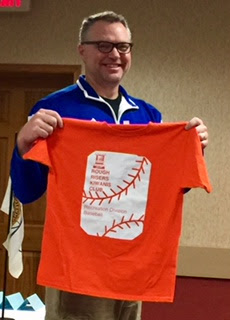 On February 8, 2017, Brock Goos, the Cedar Falls Recreation & Sports Program Supervisor, presented an informative and in-depth speech on how the CF Kiwanis Rough Riser sponsorship has positively affected the 100 plus Grade 4th & 5th aged kids introduction class of the game of basketball and soccer.

Not only do the students learn the drills and fundamentals of the game and get needed exercise, the kids have loads of fun and as well as making new friends. 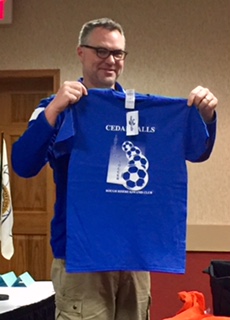 A big surprise for many of us was that we are sponsoring their softball and soccer teams.  While we all knew that we donated a significant amount of money to CF Rec Center each year, it was a surprise when Brock unveiled the shirts and they bore Kiwanis Rough Risers on the front of each one.

February is Full of Stories by People Who Make a Difference

Wednesday, February 1 - Business Meeting
Where active club members discuss their accomplishments and plans for running and developing the Rough Risers.

Wednesday, February 8 - What's the Haps at the Cedar Falls Recreation Center?
Brock Goos, Recreation Supervisor, will update our club on the many fine programs that are available for Cedar Fall-ians . . . and maybe a few upcoming opportunities. 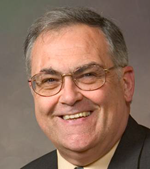 Wednesday, February 15 - Getting Involved with the Cedar Falls Rotary Club
Mike Butler, President of the CF Rotary Club, will present the activities, grants and projects of their service club.

Wednesday, February 22 - Honoring our Vietnam Vets
Niki Lipzel, Community Resource Coordinator for the Waterloo Salvation Army, will share stories of renovation, red kettles, and realization in the Cedar Valley.
Posted by Dr. Z at 10:00 AM No comments:

It's time to get out the popper and share the Kiwanian Ambrosia we call Kettle Corn.

Here is the schedule of upcoming events.  It will be updated as dates and times are finalized.

Sign Up to Read Across America with Waterloo Schools

Let's continue "Serving Children of the World" by reading to children in Waterloo.

We have donated $500 to the Waterloo JayCees/Waterloo Community Schools to help them purchase books. Now we have the opportunity to read to classrooms of wonderful kids.

There are specified times for each of the schools.  These times range from 8:30 - 3:15.  You will find the specifications on the sign-up sheet.

Click on this link to get to the Sign-up Sheet.  You can choose to read at multiple times during the day.  Don't forget to click on the Submit and Sign Up button at the bottom of the screen.

Want help in finding the schools?  Here is a map of the Waterloo Schools.  Click on the name in the left column. 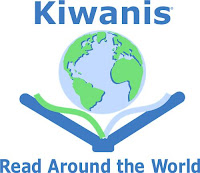