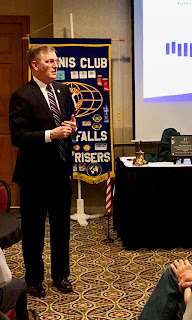 Wednesday, April 25 - This morning we were joined University of Northern Iowa's President, Dr. Mark Nook. He told us of his visions for UNI but also discussed some little-known aspects of the business side of a major state-funded university are the unsung labors of  He told us of the many intricacies of leading a university. He explained the different types of formulas and criteria in play when it comes to getting public funding from a frugal legislature.

Dr. Nook talked about getting half of the universities overall funding from state taxes which are then distributed from the Iowa Regent’s coffers.  They decide who gets what and the allocations.  The rest of the monies come from tuition and other private sources or donations.   Mark developed the formula and argument of going to a 5-year budget plan, rather than just a yearly one.  He explained the paradigm of High Quality – Fast – or On the Cheap.  Dr. Nook said that funding for UNI is actually better spent with this entity, rather than the other public universities.

Dr.  Nook has asked CEO’s what they need for their future employees to make for them a more useful lifetime career education.  Most of the UNI students stay in Iowa after graduation, which helps grow the population and with job enhancements.  This makes for a better educated and well-rounded workforce benefiting the entire State of Iowa.
Thank you, Dr. Nook.  We hope to see you again in the future.
Written by Lynn Barnes
Posted by Dr. Z at 7:53 AM